Dents and scratches are the inevitable result of daily wear and tear on a wooden floor and finished wood surfaces are more likely to scratch than any other type of flooring surface. Some people think dents and scratches on wooden floors add character, but if the damage is deep or unsightly the problem will need to be addressed.

Keeping wood floors in good condition involves regular cleaning and the occasional fix when they get scratched or dented but just attempting a simple touch-up can turn into a major refurbishment project if done by someone who is not an experienced wood floor restoration specialist. The remedy for fixing scratches and dents may not be a simple and straightforward process because there can be numerous factors involved when restoring a wood floor to its original appearance, even if it only has minor surface damage.

Small dents can sometimes be raised by placing a few drops of water on the dent and then allowing the fibres in the wood to swell back into their original shape. This Centuries old technique can be made even more affective by using the tip of a hot iron which actually steams an indentation out of the affected wood. Timber is often kiln-dried to remove moisture and when part of the internal moisture is removed, its fibres become hollow like a bunch of tubes which allow the wood to swell as they absorb the liquid. The trick works through liquid being absorbed by the wood fibres which swell as it begins to soak in. Heat from the tip of a hot iron turns the water into steam which in-turn makes the moisture absorb into pores in the wood fibres faster.

Dent Removal Procedure:
(1) Lightly sand the dented area with a P120 grade (or higher) abrasive. Fine wire-wool can also be used for this.
(2) Dab some clean water on the impression - just sufficient to cover the affected area only.
(3) Cover the area with a cotton rag and give a little time for the liquid to be absorbed by the wood.
(4) Put an iron on its highest setting and make small movements back and forth over the affected area using only the tip of the iron whilst pressing down firmly - just like ironing a shirt.
(5) Continue until the water is evaporated and the rag has dried. Wood fibres in the dent will expand and be returned to where they were originally.
(6) The type of wood will determine the number of applications of moisture and heat needed and the process must be repeated by adding extra water until the dent rises up level with the surrounding area. This enlarged close-up picture of the end grain of timber shows how wood fibres resemble many rows of hollow straws under a microscope: 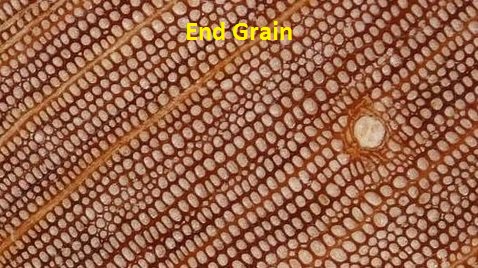 Problems and alternatives
This technique will not be successful if the cells have collapsed. If wood fibres on or near the surface of the dent have been cut by deep scratches, the steam will not be able to expand each ruptured cell. The trick will still work and the dent will rise to the surface, but sanding will be necessary to remove any scratch marks.

A freshly applied Polyurethane Lacquered finish will block moisture and it is difficult to sand and seal a small area on this type of finish without affecting the appearance of the entire floor because it is almost impossible to blend-in by sanding and re-sealing. An alternative to this technique is to make a few small pin-prick holes in the dent instead of sanding. This is worth a try because it may allow penetration through the tiny holes and into the fibres which then may swell sufficiently to raise the indentation.

The addition of water can make a lacquered or varnished finish turn a slightly white or blue colour. This reaction, known as "blushing", is quite a natural affect and will not damage the lacquer if only allowed to remain on the surface for a short time. A small amount of blushing can be removed easily by adding an oil-based stain to the area.

Oiled wood floors are far easier to repair, and a variation to this technique which also works better on softer wood is to heat a damp rag in a microwave for about 30 seconds. The hot rag is then placed on top of a dented area and then kept in place with a small weight such as a little bean bag.

It is important to understand that it is dampness which makes the wood expand more than heat generated by the iron. The resultant steam produced by heat only helps moisture to penetrate into the wood faster. Another method is to use steam from a steam-cleaner, but it may be difficult to target a small area with such an implement. Also, as this product is the worst enemy of wooden floors, it may be wise to leave this idea as a 'last resort' solution. Sometimes water is all the wood fibres need to expand, and a small amount can just be applied by resting a wet cotton-bud in the centre of the dent for a short while before trying the heat and steam technique.

Extreme caution should be taken with lightly veneered surfaces, as moisture and/or heat may cause the thin layer to just peel off. However, the modern adhesives used for manufacturing thicker veneer on floorboards may be able to withstand the steam as it is applied with around 200F degrees of heat to speed up the drying time of glue.

Scratch Repair
Lacquer finishes are extremely durable and available in two different products, polyurethane or resin-based. The resin-based type (more commonly known as varnish), quickly hardens through the process of oxidization. It is made into a liquid by emulsifying with solvent based oil and the concoction dries into a hard transparent film when exposed to oxygen in the air. The polyurethane type can be either solvent or water-based. Polymers in the mixture begin to bind and the lacquer gradually hardens as the liquid dries naturally.

Both products are very unforgiving and it is almost impossible to reconstitute a small affected area without being able to notice the difference after lacquer has hardened. Even wood flooring professionals with a high level of experience and skill know that a good result is unachievable and most do not attempt to eliminate scratches on the surface of a lacquered floor as it is a pointless exercise. Applying a fresh coat of lacquer over the existing layer without a thorough understanding of the preparation process can be dangerous because the finish may react by becoming patchy and may even peel off when dry. However, if a lacquered floor finish is only partially worn, it may be possible to take the Screen and Recoat approach, but a suitability test will need to be carried out beforehand by a wood flooring professional. Wax or oil should never be applied to wood floors previously coated with a polyurethane finish as this will make the surface impossible to recoat in the future without sanding it all off again.

It is impossible to duplicate the appearance of lacquered floors which have been factory-finished as the lacquer has more than likely been automatically sprayed on during manufacture. Trying to seamlessly blend-in a repaired patch with the surrounding floorboards to make an invisible repair cannot be expected because the new product will have been made using a completely different formula. The colour of timber also changes naturally over time as is explained in the section on Reclaimed Wood Flooring.

The procedure for repairing scratches on a wood floor finished with Hard Wax Oil is straightforward as this natural product contains no biocides or preservatives, only aliphatic low-odour mineral spirits. This type of finish penetrates into the wood, keeping it elastic whist making it a water-resistant surface. Firstly clean thoroughly and when completely dry, moisten some fine steel wool or a Scotch Brite Pad with liquid wax cleaner or maintenance oil. Rub this into the surface and then buff lightly with a soft cotton cloth when the product has dried to a haze.

Recoating may be necessary for the removal of severe scratches, and using the same product that was originally applied will ensure a perfect renovation. Hard Wax Oil is not suitable for filling deep holes, but scratches are easy to eliminate altogether - even by someone with no experience of wood floor refurbishment. Sanding a deep scratch down to the bare wood by hand needs to be done in vigorous circular strokes before a couple of fresh coats of finish are massaged-in and then wiped off. It is quite normal for the repaired patch to look lighter initially, but the treated area will gradually blend-in during the following 30 to 90 days.

Walnut Trick
The animated graphic image shown in the demonstration below looks like an illusion being performed by a magician, but the procedure is regularly used as a serious remedy by wood floor restoration professionals. Firstly just quickly run your finger up and down along the entire scratch a few times and the friction will warm up the surface. Crack-open a walnut from its shell and then rub the nut into your scratch in a circular motion. Warmth produced by friction helps the natural oils in the nut to seep into a scratch. The oil will turn hazy after a while and should be left on the area for around ten minutes to allow penetration before buffing and polishing with a soft clean cloth.